We’ve all seen images of turtles wrapped in six-pack rings and beaches littered with debris of every shape and form that’s been washed up from faraway shores. The global problem of ocean plastic is real. So much so the Ellen MacArthur Foundation and the World Economic Forum went as far as to say that there would be more plastic than fish in the sea by 2050.

It’s been estimated that between 5.3 million and 14 million tons of non-reusable plastics are added to our oceans each year from coastal regions alone. Plastic that’s dumped on land or in rivers, then gets blown or washed out to sea – out of sight, out of mind – where it kills millions of marine organisms each year. 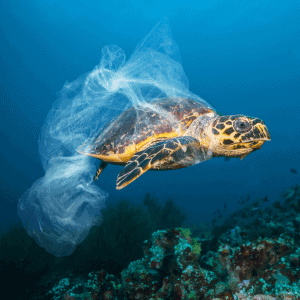 To date, almost 700 marine species have been impacted by plastic waste that ends up in our oceans. Some are strangled to death by six-pack rings or fishing nets while others ingest microplastics, which have been found everywhere from tropical beaches to the Arctic ice and in deep-sea sediments. Not only is plastic broken down by waves and sunlight, but studies have shown that tiny crustaceans, such as Orchestia gammarellus play a role in transforming plastic bags into microplastics that disburse throughout the oceans. For our marine life, there is no escape. 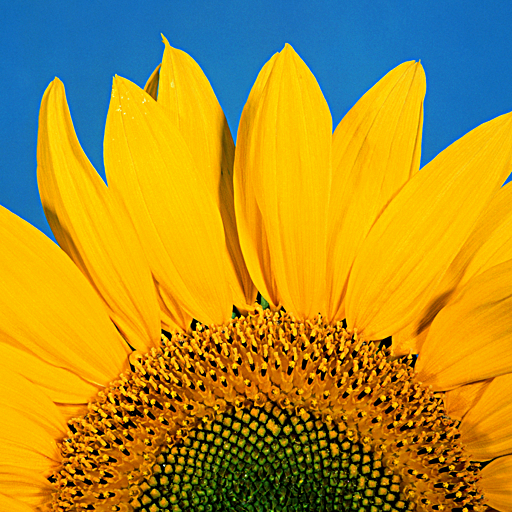 But there is good news on the horizon. Aside from Boyan Slat’s well-publicized Ocean Cleanup Project (which is on a mission to remove 90% of ocean plastic pollution), numerous other companies are doing their bit to transform ocean plastic into usable products. From drink bottles to skateboards and ethical clothing, it’s inspiring to see how technology is being harnessed to recycle ocean plastics into usable goods.

Back in 1993, Patagonia was one of the first retail brands to start manufacturing clothing from recycled plastic bottles and they’ve continued to play a pioneering role in the movement to transform ocean waste into sought-after goods. Recovered fishing nets have been used in the Evolution line of clothing from Outerknown, which was created by Kelly Slater and John Moore – two surfers who weren’t strangers to the impact plastics are having on our oceans. Abandoned fishing nets are also being up-cycled into skateboards and sunglasses by Bureo, who source their nets from coastal communities in South America. Shoe manufacturer Adidas has also played its part, teaming up with Parley for the Oceans to design shoes made using a yarn that’s made partially from recycled ocean plastics.

The challenges of an escalating problem

Collecting ocean plastics is nothing new. People have been beachcombing for decades and turning someone’s unwanted trash into their own treasures. Discarded buoys have been used to add a nautical theme to holiday homes, fish boxes have been harnessed for storage, and old pipes transformed into feeder troughs.

But recycling ocean plastics is not as straight forward as plucking waste from the water and remolding it into something new. After long exposure to sunlight, plastic photo-degenerates, which can make it difficult to identify. Coupled with contamination from saltwater and a whole variety of marine organisms growing on its surface, some ocean plastic needs to be blended with plastic from other sources at a ratio of up to 1:9 to have successful results.

Also, proving a major challenge in recycling ocean plastics is the question of how to collect microplastics in the first place. The Ocean Clean Up Project’s ambitious plans to whittle down the Great Pacific Garbage Patch are admirable but will only collect larger fragments floating at the surface. The majority of ocean plastic is less than 1mm in size and suspended somewhere between the water’s surface and the ocean floor. These small fragments of plastic are more likely to enter the food chain and end up on our plate than at a recycling plant.

A step in the right direction

It’s still unclear as to how long it takes plastic to completely biodegrade, with some scientists estimating anywhere from 450 years to, well, perhaps never. So, while recycling ocean plastics is a step in the right direction (and the continual discoveries surrounding new solutions are exciting), it can’t succeed without a global commitment to reduce our insatiable hunger for plastic products in the first place. We need joint efforts between governments, industries, scientists, as well as each and every individual to seek out viable alternatives. Remember, every consumer decision we make can be a powerful statement about how we value our oceans and the future we want for our marine life.

The race against COVID vs the war against plastic

With COVID-19 storming the world at an exponential rate it is no wonder why it feels like the battle against ocean plastic is slowing being lost. Many of the personal protective equipment (PPE) we wear and dispose of is made of or contains plastic. With thousands of people around the world using PPE items daily, it is rather concerning to think of the volume of plastic that is being disposed of and misplaced. With many rural areas perhaps not having effective waste collection it is not a far stretch to say that the problem of ocean plastics is steadily increasing at a much faster rate than before. 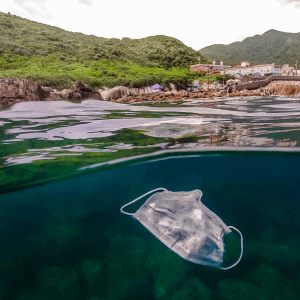 However, not all hope is lost! While this is a necessity to wear PPE we may very well be able to protect ourselves, the planet and not break the bank on having to purchase 20 disposable masks for each time we go out in public. PPE items can easily be purchased or even made to be reusable. For example – the masks we wear can be made from changeable material filters that enable the user to wear, wash, and repeat. Simply replacing your disposable surgical mask with a machine washable material mask could be a cost-effective way to keep your family and the ocean safe. Furthermore, perhaps now more than ever is the time to get comfortable learning how you can live a greener life. Whilst at home take the time to start recycling, start a compost pile or learn better ways to avoid single-use plastics. This and more is possible when we take the time to learn, understand, adapt and evolve!

This was a guest post by Pippa Strickland of iDiveblue. Pip is a product expert, a degreed environmental scientist, and an adventure-style traveler originally from Australia.