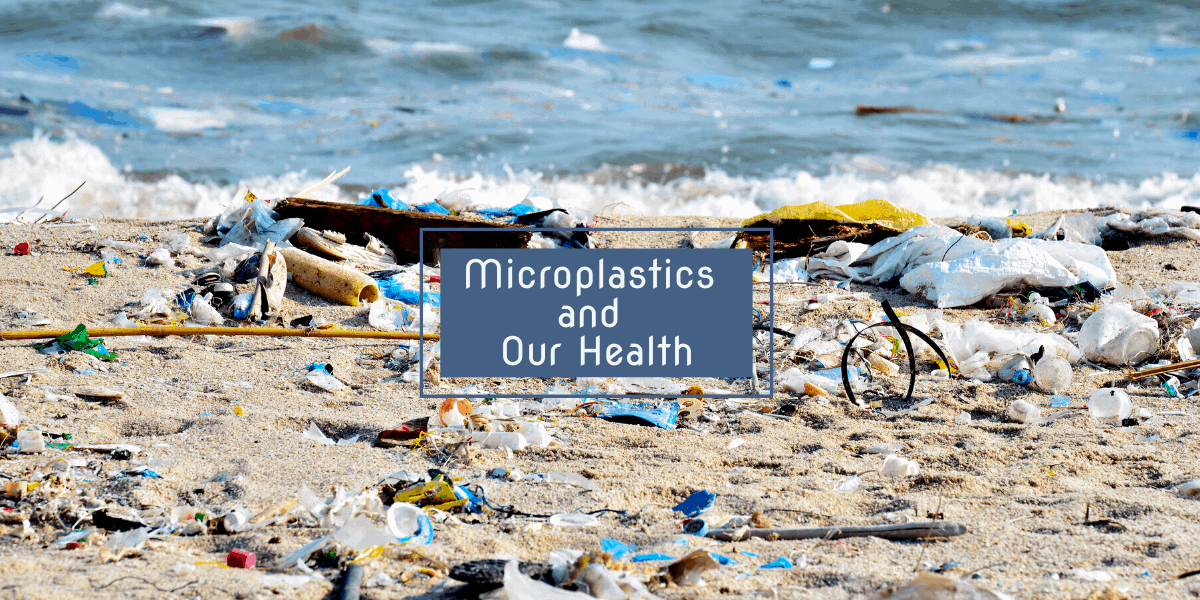 Microplastics and Our Health

When we think of plastic pollution, we tend to picture items floating in the ocean or washing up along the shore that we can hold in our hands like bottle caps, water bottles, and straws. But over time, those larger items break down into tiny pieces of plastic called microplastics. These fragments are showing up more and more including in the food we eat, causing a great deal of concern. Now is the time to understand what microplastics are, how they can potentially impact our health, and what we can do about it.

If you have participated in a beach cleanup recently, you may have noticed the itty bitty specs of blue, black, yellow, and red mixed in with the grains of sand. Those are microplastics—defined as plastic pieces less than 5 millimeters in size. Most result from larger pieces of plastic breaking down, but some are purposely used in consumer products like synthetic clothing fabric, cleaners, toothpaste, and skincare (e.g., microbeads).

With more than 300 million tons of plastic produced every year, there is a tremendous amount of plastic floating around and breaking down. It eventually ends up in waterways like lakes, rivers, and oceans contaminating our food and drinking water. In addition, so much of the food we buy at the grocery store is wrapped in plastic, which also leads to tiny particles breaking off into the food we eat.

Microplastics can break down even further into nanoplastics, which measure up to 100 micrometers in length. These tiny particles accumulate all around us including as dust in our homes. At this size, they can potentially enter our bloodstream and cells. Unfortunately, we are possibly inhaling tens of thousands of tiny plastic fragments or fibers each year. 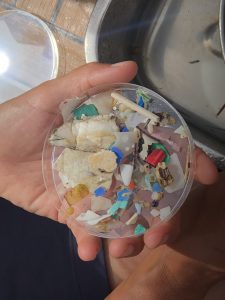 Can Microplastics Harm Us?

Although it is frustrating, the fact is that scientists just don’t know yet if microplastics are harming us. This is all so new that there is still conflicting information out there. On one hand, concern stems from what we already know about how certain chemicals in plastics can impact human health. There is already evidence, at least from animal studies, that microplastics can penetrate through the brain’s protective membrane. In addition, there’s some evidence that microplastics may pass through the placenta to a developing fetus. Some of the toxic ingredients found in plastic—including dioxin, styrene, bisphenol A, phthalates, persistent organic pollutants (POPs), and polychlorinated biphenyls (PCBs)—have been linked to a variety of health problems, including obesity, weakened immune system, reproductive issues, developmental delays in children, and cancer.

Additional research has recently shined a light on how much we are being exposed to plastic. Research presented in 2018 at the 26th United European Gastroenterology Week confirmed that microplastics are capable of accumulating our intestinal tract. All study participants had traces of microplastics in their stool. Researchers point to seafood and water bottles as the culprits. Next, a research review published in June 2019 determined that Americans ingest at least 74,000 microplastic particles per year. Another study by the World Wildlife Fund and University of Newcastle in Australia estimated that people consume about 5 grams of plastic each week (about the size of a credit card).

As you can see, there is still more work to be done to determine how all of these tiny pieces of plastic are impacting our health.

How To Reduce Your Exposure To Microplastics

If you are concerned about your exposure to microplastics, here are a few tips to consider:

This is the latest in a series exploring the health impacts of plastics in our daily lives. Be sure to read the previous blog posts in the series: