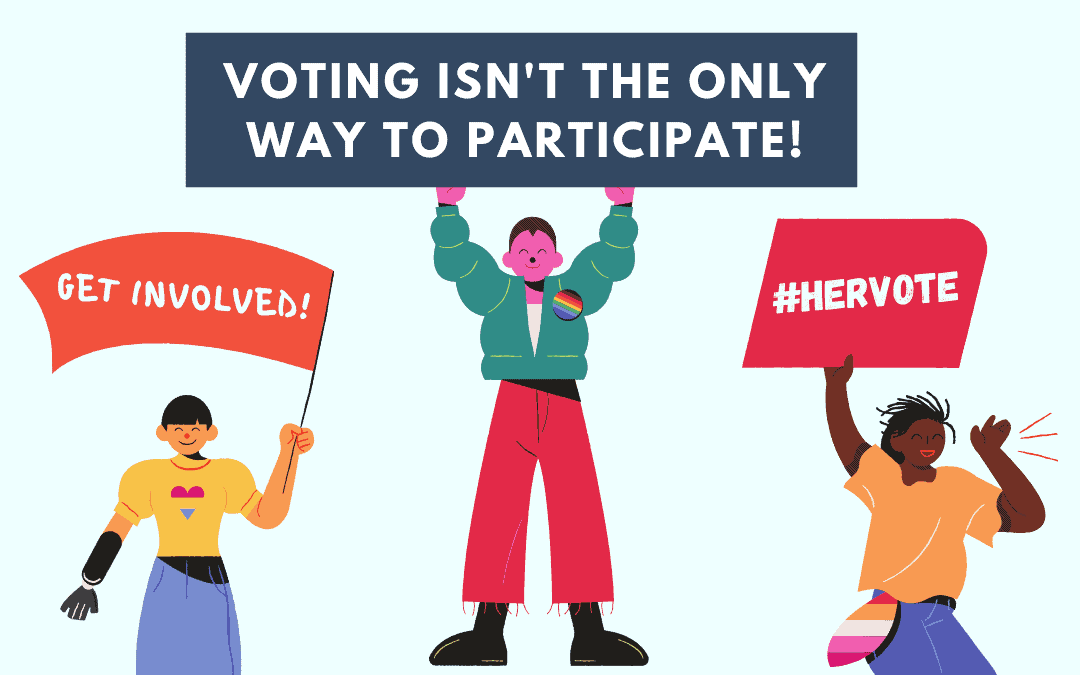 #HerVote: How Teens are Engaging in the Election

The 2020 Election is twenty days away and we are so grateful for those of you who have participated in our ‘Why I Vote’ Campaign. We are continuously inspired by the commitment you all have to our planet, our democracy, and our future generations. We have discussed the importance of voting numerous times, but today, we want to highlight the many ways to engage in the 2020 Election besides voting!

In the United States, citizens need to be at least 18 years old in order to be eligible to vote. According to the U.S. Census, in 2017, there were roughly 41 million youth (ages 10-19), making up about 13% of our country’s total population. Although a majority of adolescents are not yet eligible to vote, there are many ways they are engaging in politics, and specifically, in the 2020 Election. To better understand the ways in which our teens are involved, we met (virtually) with some of the members of #HerVote, a student-led movement and club at Cambridge Rindge and Latin School in Cambridge, Massachusetts.

A Brief History on Voting Rights for Women

In 1920, after nearly a century of fighting for women’s suffrage, the 19th Amendment was ratified, giving some women the right to vote. Although the 19th Amendment states that “the right to vote shall not be denied or abridged by the United States or by any state on account of sex,” voter suppression tactics (e.g. literacy tests, poll taxes, intimidation) were used to target communities of color to keep them from exercising their right to vote. It wasn’t until the passage of the Voting Rights Act of 1965—only 55 years ago—that racial discrimination in voting was legally prohibited. The impact was profound; in 1965 alone, nearly 250,000 African Americans registered to vote. In the following decades, the number of Latinx Americans and Asian Americans registered to vote also increased considerably. Although more Americans are enfranchised today than ever before, it is important to note that voter suppression still exists, often in the form of voter purges, voter ID laws, limited polling places, felony disenfranchisement, and more.

Many institutions and organizations across the country are honoring the centennial of the 19th amendment, and we had the pleasure of speaking to a group of high school students who are actively making history while encouraging participation in the 2020 Election.

#HerVote is a student-led movement from Cambridge Rindge & Latin School working in partnership with Harvard University & the City of Cambridge. According to their website (hervote.net), “#HerVote seeks to collect, publish, and preserve the voices of women today by asking the question: Are you going to participate in the 2020 Election, why and how?” The work of #HerVote has gained traction and involvement from communities across Massachusetts, including Senator Elizabeth Warren and Cambridge Mayor Sumbul Siddiqui! 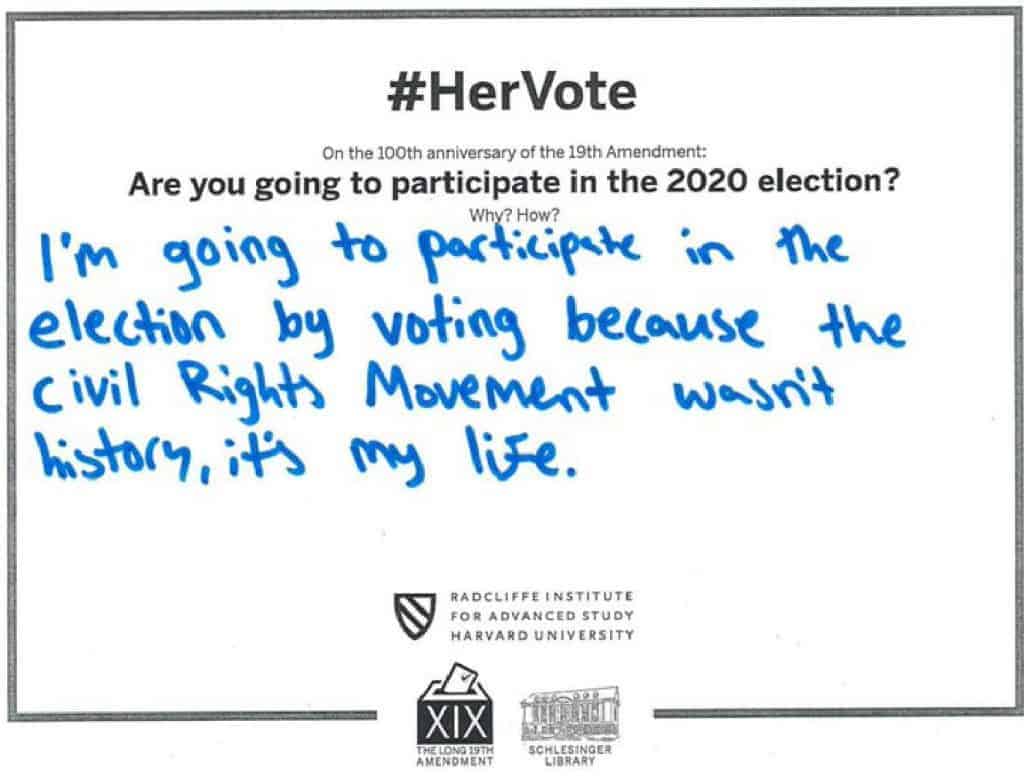 In just 4 easy steps, the voices of women today can be recorded and preserved in the archives of Harvard University forever! After collecting all the submissions, the archive will be closed for 100 years and opened again in 2120! The goal is to provide records to show future historians what mattered to women in 2020.

Words from #HerVote members: WHY and HOW are our teens engaging in the Election?

In order to better understand the ways in which youth can participate and engage in the 2020 Election, we interviewed seven #HerVote members for their thoughts. Responses will be kept anonymous.

Why is it important for youth (under 18) to engage in the election (national, state, local)?

“We need the passion and ideas of young people to better lead a democracy that’s well-informed, not just from adults’ perspectives.”

“Since the election directly affects our futures, we have to participate in other ways besides voting.”

“It’s good practice for when you are older, and it’s the only way to ensure that a government that might not be representative of you still takes into account your interests.”

“This generation is ultimately going to be the future for this world so I think that it is really important that our voices and perspectives are heard and seen.”

In what ways have you engaged/participated in the 2020 election?

“Through the #HerVote club, encouraging voting, letter writing, and staying informed about the candidates.”

“I engaged through a forum in #hervote this summer which revolved around youth suffrage and lowering the voting age.”

“I participate in the 2020 election by providing and sharing any information about the candidates and election verbally and through social media.” 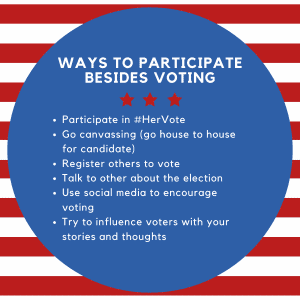 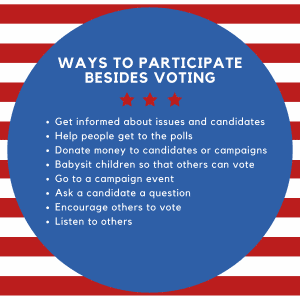 In your own words, why is #HerVote so important? What motivated you to get involved?

“#HerVote is important because it’s bringing issues to light, like incarceration, the voting age, and because it’s collecting the voices of women from all backgrounds, especially those whose voices weren’t collected in the past.”

“It’s important to me to be involved because my ideas and my peers’ ideas matter. We know right from wrong and for adults and government officials to downplay the vote of younger people is simply not fair.”

“#HerVote is so important because not only does it shed light on so many important issues, but knowing the information we collect will be kept for years and for generations to come lets us know that the work we have done won’t be forgotten.”

“What are some of the most important issues/current events to you?”

“Some of the most important issues to me are racial justice, police reform, and environmental racism.”

“Climate change is an issue I wish we saved more space for in politics, I believe it’s of immediate importance. I also think that neither of the current presidential candidates do not do enough to reflect the values and popular support of and for the Black Lives Matter movement.”

“Racial injustices, genocides happening all over the world, COVID, the upcoming election.”

What advice/words do you have for others who may be hesitant or reluctant to get involved and engaged in the election?

“It might seem scary or useless at first, but try to vote or encourage others to if you can’t. Any sort of involvement is much more impactful than none, and helps bring change through all levels of government.”

“I would say to not be afraid of what you believe in as everyone’s voice matters.”

“If you care about what happens to you or your community then it helps to stay active and attentive during the election.”

“It has never been more important to make sure your voice is heard. It’s a matter of protecting our democracy and the integrity of the election. Getting involved has also never been easier, and there are so many resources available with a quick google search.”

“You don’t want other people to be your voice, you want to be your own voice, so let it be heard. Your opinions matter and you should have a say in how you would like the world you live in to look like, so help shape it.”

“Just do it! We are the future so our vote matters (every single one of them do) also if you’re 18-25 (still pretty young), you don’t want to look back and know you didn’t have any political participation or were involved in the current events happening back in 2020.”

Thank you to the members of #HerVote for taking the time to speak with us and for the important work you all are doing to strengthen our democracy, preserve the voices of women, and encourage participation in the 2020 Election!

For more information about #HerVote: