50% of all plastic is used once and thrown away. There are four main items that make up the bulk of that statistic: plastic bags, straws, to go cup tops and plastic bottles. Of those, plastic bottles probably represent the most as they include everything from soda, to shampoo, to the ever present plastic water bottle. Bottled water is taking over our planet.

Bottled Water use is slowing

Did you know that Americans consume over 8.6 billion gallons of bottled water each year? We are now drinking more bottled water than milk or beer. While that’s good for our waistlines it’s terrible for the planet. On average only 1 in 5 plastic bottles are recycled. While recycling plastic is always a good idea, it only postponed its trip to the trash heap. Plastic is downgraded when it goes through the recycling process. Eventually it becomes unusable and ends up in a landfill.

The other 4 out of 5 bottles that weren’t recycled are already there. Depending on the circumstances in the landfill the bottles will take between 400 and 1,000 years to decompose. Hundreds of years after they were used for a few minutes. If the bottles avoid the landfills they head to the ocean to be eaten by fish and turtles or join one of the 5 swirling plastic gyres.

Unfortunately this plastic problem is only growing. Global consumption of bottled water goes up 10 percent each year. Scientists estimate that there could be more plastic than fish in the ocean by 2050. If we are going to stop before we fill our planet and our ocean with plastic, eliminating water bottles is a good place to start.

Believe it or not, it requires 3 times the amount of water to produce a plastic bottle than it does to fill it. So already that’s a massive waste of water. It takes 17 million barrels of oil to produce plastic bottles yearly. This could fuel 1 million cars for a year. That oil is just to manufacture the bottles and bottle the water, it doesn’t include the transportation to get it to retailers.

That’s just the environmental sustainability, it doesn’t touch the economic costs. According to the Story of Stuff, drinking eight glasses of tap water a day costs around 49 cents a year. If you got that same hydration from bottles you’d pay about $1,400 or 2,900 times more.

A lot of people drink bottled water because of concerns about tap water. The recent water crisis in Flint, MI is one of the reasons why sales of bottled water have increased. As that incident showed, sometimes the fear is founded. While it’s important to stay informed about your area, studies have shown that well over 90 percent of our tap water is deemed safe on a state and federal level.

It turns out, bottled water might not always be safe anyway. The NRDC conducted a comprehensive four-year scientific study of 1,000 brands of bottled water. The results showed that one third of the bottled waters violated their own industry standards for water quality. They concluded that, “…there is no assurance that bottled water is any safer than tap water.”  In fact, a report by Food And Water Watch says that almost half of all bottled water is derived from tap water. 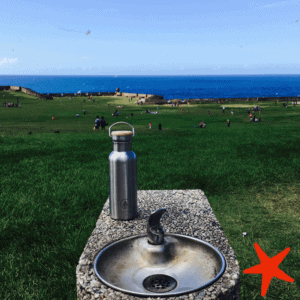 There are times when bottled water is your best alternative. We’ve all been there when it’s the only choice between you and thirst. But each time we can remember a reusable bottle and fill it, it’s an #easywin for the environment. Celebrate those successes and make them happen as often as you can.